Surgery in the abdomen can be achieved by classical or laparoscopic methods, by the same principles.

If surgery is performed classical incision (cut) single variable length, sectioning the skin, but especially abdominal muscles to perform surgery in the laparoscopic scalpel is used to cut through the skin only more points!

How does the intervention takes place

Special instruments called trocars are introduced through these holes, which have a diameter of 5-15 mm variable that penetrate the muscle layer, removing the muscle fibers without bucking. Then instill a medical gas (carbon dioxide), controlled and constant pressure to relax the abdomen.

Through a trocar (such as in the left figure above) insert a telescope (as in the above image center right), connected to a camera and a cold light source, so that images are projected on the abdominal organs multiple monitors in the operating room just like in the picture below!

Trought other trocars are inserted long tools with diameters between 5 and 10 mm, with which surgery is performed. At the end of the intervention is discharged carbon dioxide and withdraw trocars and muscle fibers, elastic being back in position. The skin is then sew a few wires.

The rule is that the most common surgeries in abdominal laparoscopic method to achieve! Included in this category mining operations gallbladder (bile), Appendix, benign tumors (cysts, polyps, nodules, etc.), abdominal organs (most frequently in the ovaries and uterus), restoring the integrity of the abdominal wall, what happens if hernias (of any kind) and eventrations (abdominal wall defects healing after surgery performed in a classic manner) and gastro-oesophageal reflux operations addressed.

A special mention as do patients with severe obesity (morbid), to which interventions weakened and, in general, any abdominal surgery is preferable to perform the laparoscoscopie.
But there are operations that, although technically possible to be performed laparoscopic, were not in practice, due to their complexity, such as, for example, liver or pancreas major operations or operations addressed malignant tumors of the abdominal organs (for example, gastric resections).

What diseases CANNOT be treated this way

Laparoscopic surgeries are not used in organ transplantation (noting that laparoscopic kidney harvesting tends to be a choice!). They are limited in some cases of emergency surgery, for example, intestinal obstruction (blockage bowel) and neglected peritonitis (following perforation of the stomach or intestines).

The main advantages of laparoscopic surgery

The advantage of laparoscopic surgery is performed in the manner by both parties! Doctors operates more comfortable because they see better anatomical structures, thanks equipment. And patients had significantly lower pain and are able to stand up and mobilize a few hours after surgery, thanks to minimal trauma abdominal muscles. Convalescence is much shorter, social and professional reinsertion and it is faster.

As a general rule, it remains indisputable idea that laparoscopy is better!

The decision for classic surgery or laparoscopic is taken for each case but, honestly assessing the risks and benefits of each method! 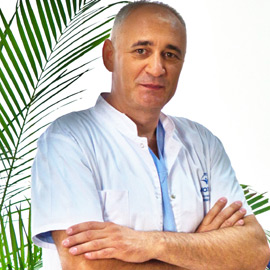 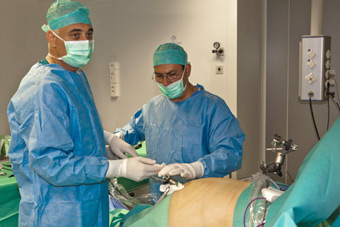 Note: It is possible depending on availability consultations bariatric patients and on days or hours displayed!

The decision to have surgery for obesity will not be easy!

Morbid obesity is not just a matter of aesthetic body but a major health, a severe disease that entails other medical complications, temporary or permanent disabilities, decreased life span etc. Read about possible interventions:

Stomach shrinking or Gastric Sleeve involves removing the lateral portion of the stomach ...

Is the bariatric surgery procedure which is characterized by creating a small gastric reservoir and anastomosing it to a jejunal loop ...

Abdominal surgery can be performed either classicaly or laparoscopicaly ...